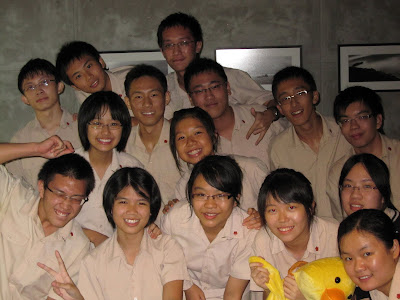 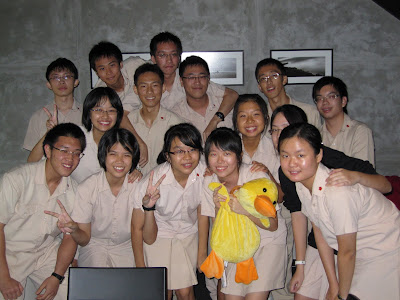 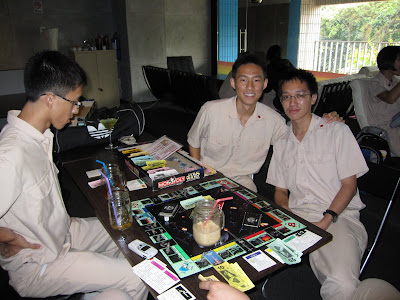 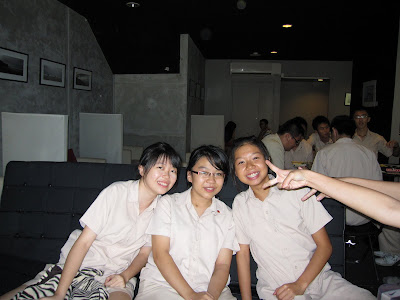 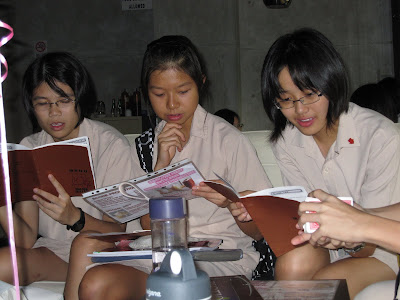 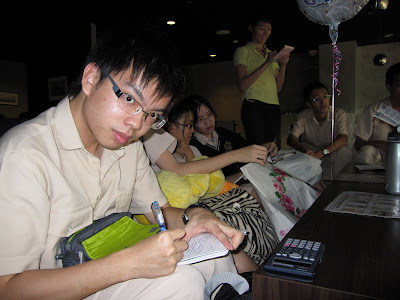 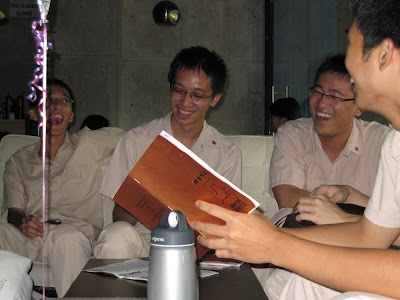 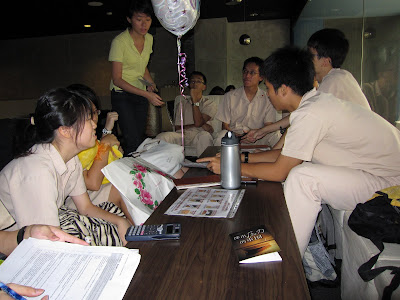 hmm..can you all open the chem elearning files in ISP?

if cannot, which means that the files are really damaged, then tell me also ya, can send email to inform the teacher bah...


Well, class blog is so dead.
And it's been a long time since we had a class outing. So, we'll be having an adhoc outing at beauty world there tmr. There's a shop with lan, arcade and pool, so there should be something for everyone. I think it requires membership, should be $2 bah, so not a big deal. It's ok if not all the ppl can make it coz this is kinda rush, I doubt we can find a day when the whole class can go anyways, so just try to go. But there should be a better planned class outing some time later. ;)

Here are the details for tmr:
Date & Venue: 31st April at beauty world
Time: 11am (tentative, it's ok to go later also)
See ya there~~!


the 30 hour famine's coming up again this year. this time its from june 5 to june 6, friday to saturday. its basically no food for 30 hours, but you will be provided drinks to supplement yourselves if you feel the need to. (you definitely wont go hungry.) there will be activities, games, groupwork, community involvement projects, and exhibitions on this year's theme (“I Can. I Will. Make A Difference”; HIV/AIDS-related). and this year, somehow it starts at ACS (Barker) but ends at D'Marquee, Downtown East with a concert.

there is the same fee as last year: $30 camp fee. (to be submitted via check to World Vision International) also, a registration form to be signed by your parents. both are to be mailed to the office directly, or submitted personally. but should you want to sign up, i'll act as coordinator for our class if the school does not, or some students dont come up like they did last year. i'll check with the school asap to see if there will be a school signup first, will keep you guys informed.

yupyup. thats all about this event. strongly recommend you to join, especially since (enlin and) i went last year and experienced it firsthand. $30 may be a bit much, but start saving now and it would work out. =) please try to go!


Wee~ long time no post! haha i know everyone's mugging hard for block test now =D but just to give you guys a little bit of update on stj =)

stj will confirm be held on 11th April from 4 to 10 XD venue is at my house, which is near bukit panjang there.. erm.. for a bit of information, 24/26 juniors are confirm going! with one tentative =D so... hahas i'm sure it's going to be very exciting :D

ehh.. food-wise i think emelyne will give us all an update soon =D so.. happy mugging!


When life gets boring,
We need a little spark to brighten our lives!

Before the school term starts on 12th Jan (2nd week of term), here are some updates. :]


Firstly, these would be our teachers (koped from ISP):

These are for the 3-ple' science combination with all sciences as h2. Those taking h3, your teachers should be in ISP too (curriculum --> course registration --> 10. View Course Registration Class)


Next, these are the dates for review tests:


Also, these are some important dates in the school calendar:

1. J1s come in 2nd Feb, they have 2 weeks of orientation
2. Senior class meet Junior class is around the 9th to the 15th Feb
3. CNY -- senior classes would be putting up stalls
4. Dramafeste would be on 5th-6th March
5. Blocks 1 are held early in March


Lastly, the assembly formation and math lecture venue is also up on SMB, do check out those details too. Thus far:

yo. hmm. saw a video today. quite cute.


yo people! merry christmas everyone! and a happy new year. you still have around 2 weeks left. 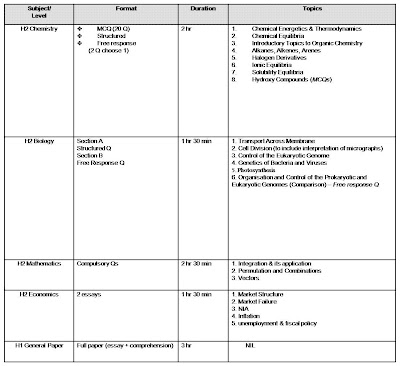 Study hard for bio spa skill A and lect test! hahaha, i shall give you all moral support. BWAHAHA


Hi Guys,
As many of us are overseas during this period, we'll have a class outing somewhere late december, when most of us return. From the many great feedback i received from you guys, the current preferences are BBQ and movie outing. Will keep you guys updated!
Jon :]
10:09:00 PM   0 Comments


Hi Guys! Hope the holiday has been enjoyable so far. Here's a short video of the song "The Love In Us", its composed by the girl (backed by an orchestra).
Also, some sparks of little geniuses. Watch 3.46 min to 4.06 min.

Here's if you didn't catch it:
"All her songs take 10 minutes to write and she is incredible," says Ellen.
Emily Bear broke the growing tension by putting a finger on her lip, making Ellen look culpable.
"What?" Ellen answered softly. "Don't tell other people?"
Then came the cutting rejoinder, "Some took five... "
Enjoy!
-Jon
9:30:00 PM   0 Comments


hahaha. i copied this from 08s75 blog. gd things should be shared. bleahz

day: wednesday 12/11
venue: daryl's house (again!:D)
time: 4pm
what we are gonna do: potluck!
what to do: prepare at least 1 dish within your gorup to share with the class! cost of ingredients must be below $10.keep the receipts! and get this: EVERYBODY HAS TO PAY. yupp even if u arent going(:

yupp thats it!
and we will be watching movie(s) too! while we are eating. so it'll be good if all of u can suggest which movie genre(s) you would be interested in. yupp specific movie titles are also welcomed:D though its another matter whether we are able to get the movie or not. yupp.

ohh and plz tell what u all are cooking! asap! thanks:D
thats it! good luck with the food and cya on wed!


Hi 08s73 =),
I've come up with two tentative designs for our class logo which if agreed upon could be used for our class T-shirts. The first is the more serious of the options  while the other is more "vibrant". Forgive me if they're not really that impressive...created it within an hour using flash 8 in the wee hours of the morning. Please send me any comments on the design or the colours of the logo through msn (Can't really decide on a colour that is universally liked by both genders) and as you do that, you may want to help me figure out the "special characteristic" that everyone in our class all share...I'm still having trouble identifying that. At the mean time, if any of you guyz/galz have alternative designs, feel free to email them to me.

hi people since you all have nothing to do, come my blog and tag! wahhaha

ohh and who wanna buy orange/pink/purple/red/blue/green pen(s), come to me! im selling!:D wahhaha. and dont ask why i have so many:D


This is for people like me who hate tables:

It happened during its trial run...


Reporters caught a picture of the tragedy... 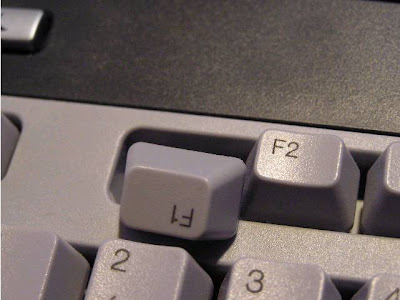 Just something for you to laugh about :D

Hope it wasn't too lame for your mental capability. Good luck for the 3 papers left!


Funny for public property to be destroyed by 'elite' student?

A STOMPer came across this picture of a student with a bent signpost, as if the latter was in the act of vandalising it, and he is concerned that students these days are too caught up in the paper chase and are not learning the right things.

Perry wrote, in his email to STOMP:

"I came across this picture showing a student destroying and showing off what seems to be the remains of a street sign. I request for a clarification and discussion upon the action of this student clad in the uniform of what I believe to be of Hwa Chong Institution which was renowned for its history of nurturing great academic leaders in the local scene.

"The question I had in mind was, does having higher education eventually make the students lose the fundamental values which we are thought to be possessing?

"The showboating of destroyed public property seems to very much amuse the person in the picture.

"Aren’t we told at a very young age that every single of us should partake in the effort of protecting public properties? I am rather intrigued by the mindset of such student and what are the motivating factors which result in such insightful actions.

"For example, the formal chairman of the National Kidney Foundation was charged with inappropriate usage of the funds. Think of how much academic qualification he had achieved before he took on the mantle of leadership of the NKF.

"I believed many of us had witnessed students misbehaving in public.

"Students loitering under void decks after school; making a nuisance out of themselves by littering and making noise.

"Underage smoking, sex and alcohol consumption has become common and the abnormality of this issue is that no strong movement against such acts had been seen. For example, During January and February, 1,164 people under the age of 18 were nabbed for underage smoking, more than the 1,113 caught in the first two months of last year and 1,069 in 2006. There are an increasing number of offenders.

"No obvious resistance about such moral issues was seen is it because only the academic results of the kids count? Are our character determined by the number of “A”s we scores? Is such degradation of moral thinking resulted from the academic driven society?"

Did you notice something? Our uniform colour is Khaki, not GREEN. I am sure all Hwachongers would have some thing to say as well. 0.0!

And so i scrolled down to the "comments" to find some brave soul who would point out the egregious flaw/slip of the mind, and found a friend phrased the comment ever so succinctly. This is what he wrote:

Hi there, you are committing a very grave Reductio ad absurdum fallacy by deriving such a conclusion from a single picture.
No doubt there are teenagers who are committing the things of which you have stated but using an isolated example as a the final example to your conclusion of grades chasing > character building is flawed.
-peace-

hiii people!!! hopefully u see this and pass the msg on!

lunch, movie (most likely WALL-E), then ice-skating/pool/bowling/wadeva we feel like doing.